The Hunt for the Perfect LMS, Part 1

When a company is ready to purchase or lease a Learning Management System (LMS), the contracting department will issue either a Request For Proposal (RFP) or a Request For Quotation (RFQ) to get the acquisition process started. This RFP or RFQ is then sent out to vendors who provide the services desired.  As an online pilot training and aviation course developer, I’ve seen my fair share of RFPs over the years, and the capabilities available seem to fall into one of three categories: a) Capabilities that are usually requested b) Capabilities that are often requested but have nothing to do with the LMS and c) Capabilities that should be requested, but typically aren’t.

The most common requested capability is by far the compliance with the SCORM standard. SCORM is an acronym for Sharable Content Object Reference Model.

SCORM is a collection of standards and specifications for web-based electronic educational technology. SCORM started back in 1999 with President Clinton’s Executive Order 13111 that tasked the US Department Of Defense to develop common specifications and standards for eLearning across both federal and private sectors. Basically, the US Government wanted to standardize the way eLearning was used across agencies, in an effort to make content widely available across all branches of government.

The development of the SCORM standard was assigned to the Advanced Distributed Learning (ADL) Initiative from the Office of the United States Secretary of Defense.

SCORM basically defines how a course (called a Sharable Content Object or SCO for short) and a Learning Management System Communicate with each other. The specification also defines how the course is packaged. SCORM is strictly a technical standard. It does not address instructional design.

Version 1 of the SCORM standard became available in January 2000, and over the next 9 years, the standard went through several versions until it landed at the most recently developed version, version 4. 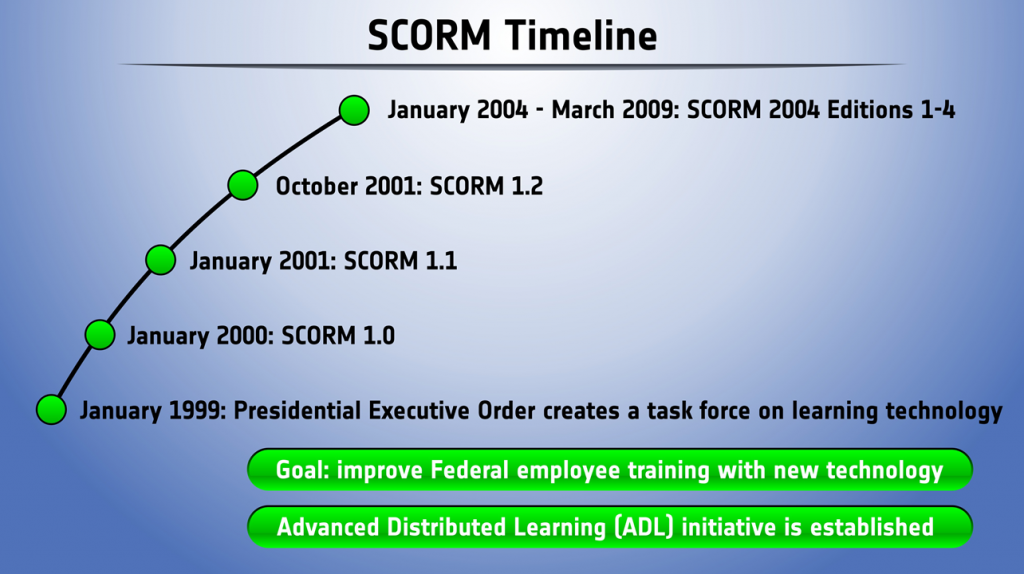 Interestingly, the Airline Industry had a head start on the US government in this area, due to the formation of the Aviation Industry Computer-Based Training Committee (AICC) back in 1988. The purpose of the committee was to develop guidelines for the aviation industry in the development, delivery, and evaluation of CBT, WBT, and related training technologies.

During those days, personal computers weren’t really “in vogue” yet, so the AICC specifications dealt primarily with hardware (such as video formats, audio specifications, etc..). It wasn’t until 1993 that AICC came up with a specific set of specifications that dealt with Learning Management Systems (LMS). At first, the specification was designed for courses delivered via CD-ROM or Local Area Networks (LAN), but the AICC upgraded the standard to include web-based delivery. In 1999, AICC added Javascript as a requirement. Javascript is a programming language that theoretically should be standardized across browsers. I say theoretically because it means that code should be handled the same way by all browsers, but after you work with that language, you quickly discover that’s not always the case.

In the end, these two separate developments eventually became one big, concentrated effort that involved the Aviation Community and the US Government. 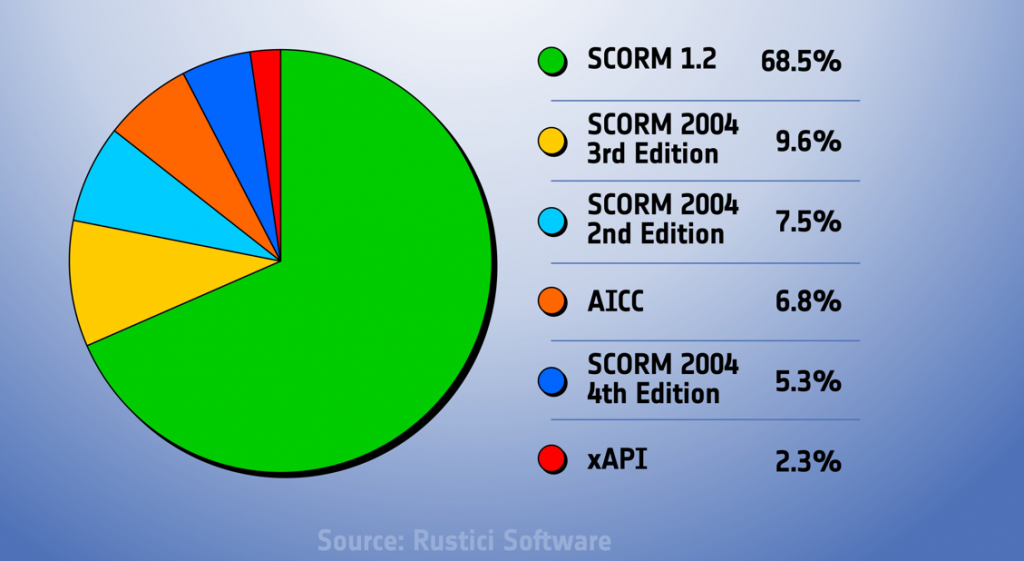 One thing to notice on the pie chart is that as of 2016, the vast majority of courses were implementing the SCORM 1.2 standard, but the adoption rate of the SCORM 2004 standard was tepid at best. There are several reasons for this state of affairs:

Basically, the cost to implement SCORM 2004 was disproportionate to the benefits offered.

RFPs usually contain a requirement to implement the two major versions for the SCORM standard: 1.2, and 2004. This requirement is understandable because most airlines and training centers have a lot of content designed around those two standards. But in my opinion, this requirement is a bit short-sighted.

If you look at the first graph, the latest version of the SCORM 2004 standard was released in March of 2009. What about the period between 2009 to 2019 you might ask? The answer is nothing.

Why? Three events took place during this period.

For these reasons, companies that issue RFPs that concentrate solely on the SCORM standard are placing themselves in a vulnerable position. Things move very rapidly in the programming world, and a piece of software (such as SCORM) that worked very well yesterday may not work so well tomorrow.

It’s important to keep these things in mind when you’re searching for an LMS, because programming standards and updates will impact the usability, effectiveness, and overall experience of the LMS created. The SCORM standard is a great place to start, but it shouldn’t be the only thing you’re asking for when you issue that RFP.